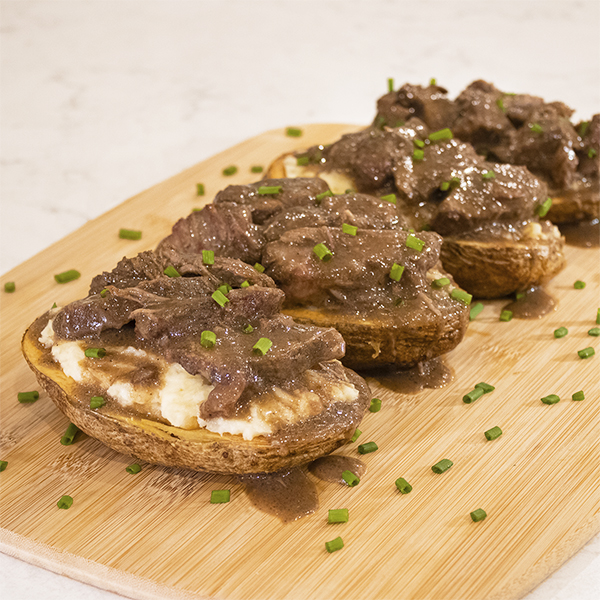 Two classics in one meal. Savory twice baked potatoes topped with an easy to prepare American classic, Homestyle Pot Roast with Gravy. It's comfort food at its very best.
Ingredients:Instructions:

Slice each potato in half lengthwise. Coat the cut side of each potato with olive oil and place sliced potato halves cut-side-down in a baking pan. Place pan in preheated oven and cook potatoes for 1 hour or until tender.

Spoon the potato mixture into each of the potato skins in equal portions. Place the stuffed potato skins back into the 400˚F oven and bake for 10-12 minutes to heat through.

When Pot Roast is completely cooked remove meat from pot, place on plate and set aside. In a small bowl mix together 1 tablespoonful of corn starch with 1/4 cup of water. Set your pressure cooker to sauté or slow cooker to high heat and add the corn starch mixture to the juices in the pot rendered from the beef. Whisk together until well combined and gravy thickens. Cut pot roast into thin slices and return to pot, coat evenly with gravy and let heat through.